music at a distance 52 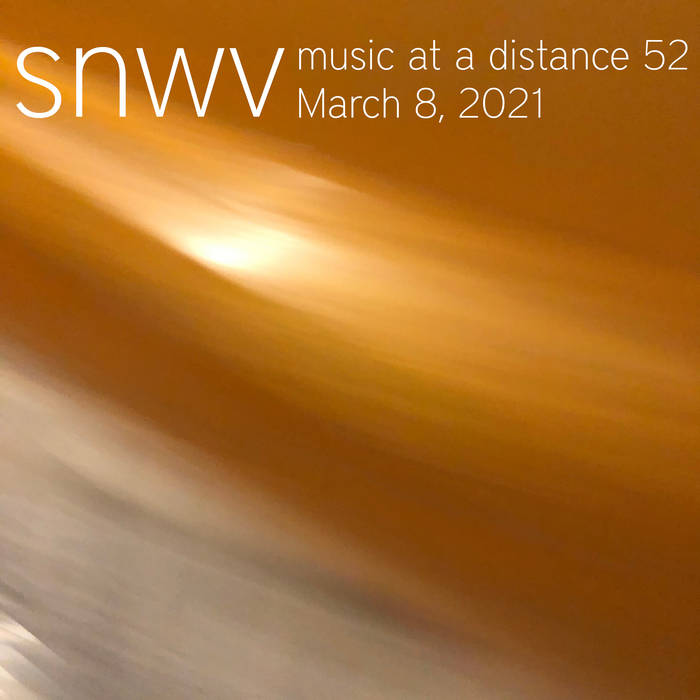 This week...marks the 52nd of the music at a distance series. We're not quite to the one-year mark, though, since I started these performances on the first Monday of lockdown, rather than the end of the week. But we've made it through a year of these together.

During these 52 weeks of performances, I've improvised 220 pieces lasting more than two full days*. It's kind of baffling to think about. How does a person do this? Or why?

Let's do why first. Just over a calendar year ago, a lot of us saw our last in-person live music experience. (For me, it was the majestic Om at Spirit in Pittsburgh, and I'm very glad I was there.) On the first day of quarantine/lockdown here, March 16, friends online were discussing how eagerly awaited performances and tours had now been canceled. They felt a kind of looming void of uncertainty and isolation. Events unfolded that way for a lot of us. In the moment, I thought if people wanted some reassurance and connection--hey, I wanted that myself--I could do a livestream that night. I'd done it before; the software was essentially set up. (I think...Jack OS X was broken, and I might have found BlackHole that day to fill that role painlessly.) I didn't have a plan or repertoire ready, but I'm an improviser. Absence of planning is not an obstacle. Maybe it *is* the plan.

So I did it, people listened, and I thought...why not put it out? Why not do it every week until...things are back to "normal," or at least normal-ish? "Why not?" seems like a casual question, but it's powerful. It's open-ended. It invites a range of possibilities--there doesn't need to be a solid argument as to why, and only a solid argument as to why not can stop it.

As for *how*, part of it is being an improviser, and part of it is that I'm already used to small-scale, regular creative practice. One doesn't set out to create two days of music in a year, perhaps, but doing a little less than an hour a week, you'll get there. You don't need to have an elaborately structured creative plan. You just need to put in the time. I'd encourage anyone with a creative impulse to take up some weekly practice. Just create one thing a week and keep going. At the end of the year, you've got 52 of them. That's more than an album. It's more than enough for a reading, a show, or a book. Just start. You can do it.

I've learned some things over the course of the year. I've learned that it helps to make changes each week, particularly if the previous week went well. "That went great; I'll do that again next week" tends to mean that I'm not going to hear what I want to hear, or ideas won't come easily, and I'll feel like I'm expending a lot of effort without quality results. Making some kind of destabilizing change (different instrument, some difference in how I approach the patch, changing pedals, editing the patch in some way, making some other choice that presents a challenge) tends to force me to be open-minded about what I'll be doing, and music can enter that space.